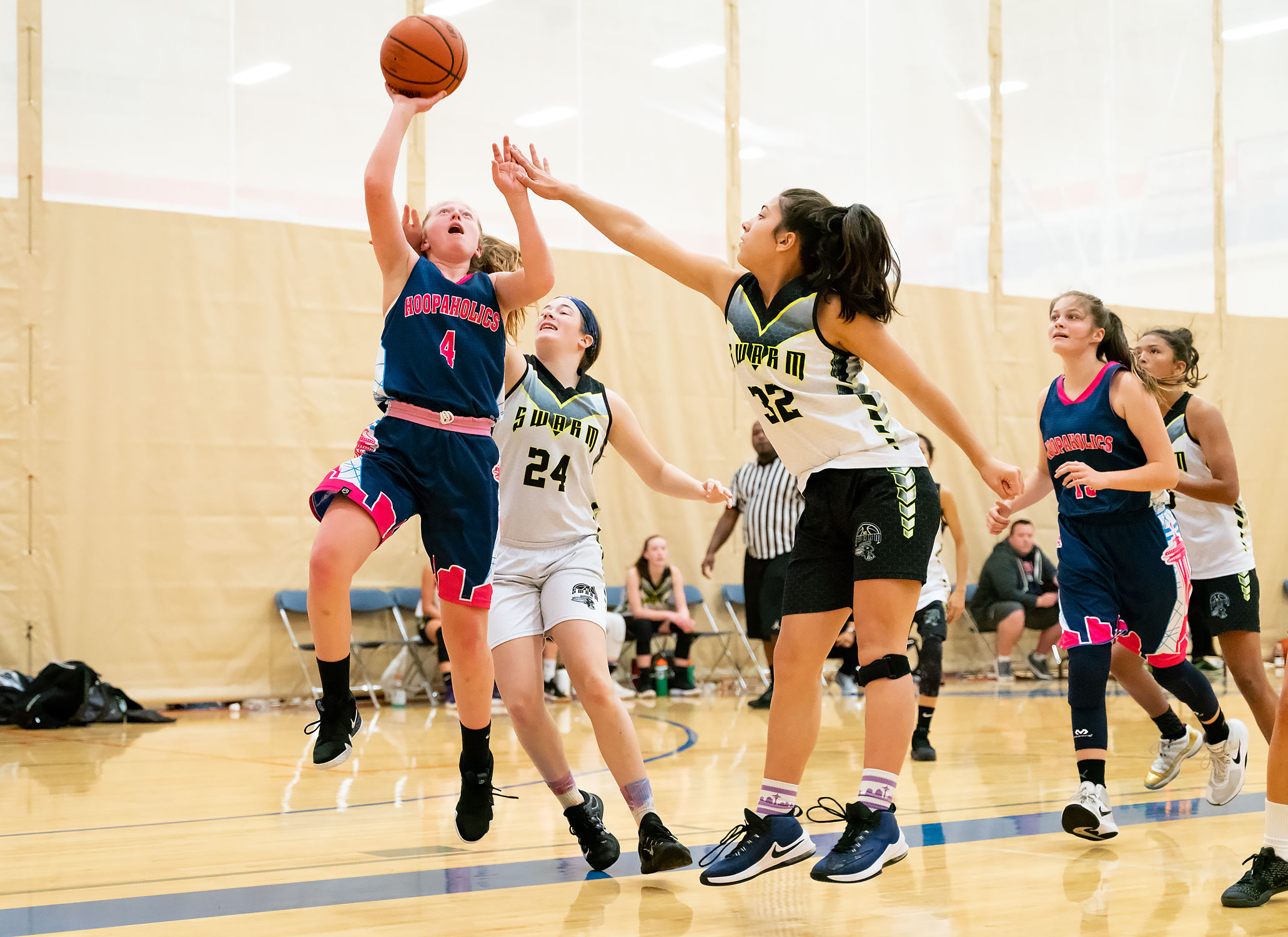 The first two minutes of play following tipoff between the Swarm and Hoopaholics girls were quiet, with a couple of shots but no points put on the board. With strong defensive play at both ends of the floor, the first score came on a long pass by Swarm #0 in transition, down the floor to a sprinting #1 who laid it in for two points. Moments later, though, the Hoopaholics #12 hit a three pointer from the right-top of the key and took a brief lead before the Swarm’s #1 sunk another layup for two.

At 4-3, though, scoring slowed to a crawl. Minutes passed, with both defenses holding off all penetration into the paint, until the Swarm’s #23 rattled in a weak-side eight footer with nearly half of the period expired, followed by a layup by #2 a minute later to make the score 8-3. But before the Swarm could run away with the game, Hoopaholics #4 forced up a shot through heavy traffic in the paint, closing the gap back to 3, and then she hit a long tw0-pointer from the top of the key to make the score 8-7.

In the closing three minutes of the half, though, the Swarm began to pull ahead. With the scoreboard at 10-7, Swarm #3 fed the ball out to #23 who was waiting beyond the three point line… and she drained it. Moments later, she dropped in another twenty-footer from the opposite side of the court, making the score 16-7. But the Hoopaholics weren’t ready to give up, and came back quickly with a couple shots of their own. After a made free throw by the Swarm, the score was 17-11 at halftime.

As the second half opened, both teams redoubled their efforts on defense, and nobody scored for the first three minutes until finally #7 hit a free-throw for the Hoopaholics to get things going again. Just twenty seconds later, though, #23 drove in for a layup on the other end of the floor, making it 19-12. The Hoopaholics (#12) made another free throw, which was followed up by another three-pointer by the Swarm’s #23 (22-13).

With 9:40 left in the game, the Hoopaholics made their first field goal of the second half (24-15), but they were not able to gain any momentum; though they did make another free-throw, they didn’t score a point from the floor again until the clock had wound down to 3:40 (26-18).  Final score, 31-20. Winner, Swarm.