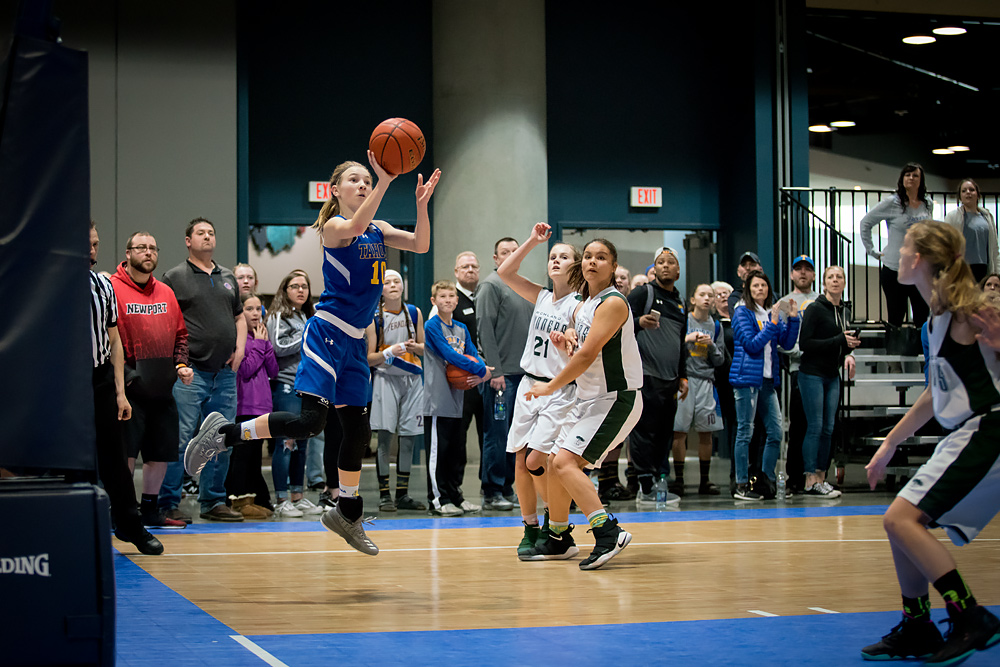 For the state title, the Richland Gunners and Tahoma Bears hit the hardwood (or something very similar in appearance) on a court in the Spokane Convention Center. It must have been about the final game played in the tournament, because when I looked up from the action in the second half, I realized that the surrounding courts in the cavernous hall were all deserted, and all remaining eyes were on this game.

The Gunners jumped out ahead early, leading 0-7 after the first seven minutes of play, and it was halfway through the first period before Tahoma got on the board with an 18-footer to make the score 3-9. And then it was Tahoma that was hot, tearing off a 9-0 run to tie up the game with about 6:40 to go in the half. With the score evened up, the defensive stalemate crumbled and both teams began putting points on the board. As the final seconds of the first half ticked off the clock, the Bears were shooting three free-throws to gain a bit of a foothold at 24-19.

In the second half, the Tahoma girls kept grinding ahead, building their lead to seven points with only three minutes to go. But Richland refused to go quietly, and came storming back to tie the game at 51-51 in the final minute of the game. As the clock ticked down, it appeared that the game was headed for overtime, until Tahoma’s #10 broke away down the court and hucked an off-balance shot towards the rim. As the ball slipped through the net, the buzzer sounded, and the Tahoma Bears had won the the State Championship title, 53-51.

If you’d like high-resolution digital files (up to 42 megapixel, but most will have been cropped to around half that size) or prints made of any of these photos, just let me know.  You can email me: matthew@gorephoto.com , or use the contact form on this site.