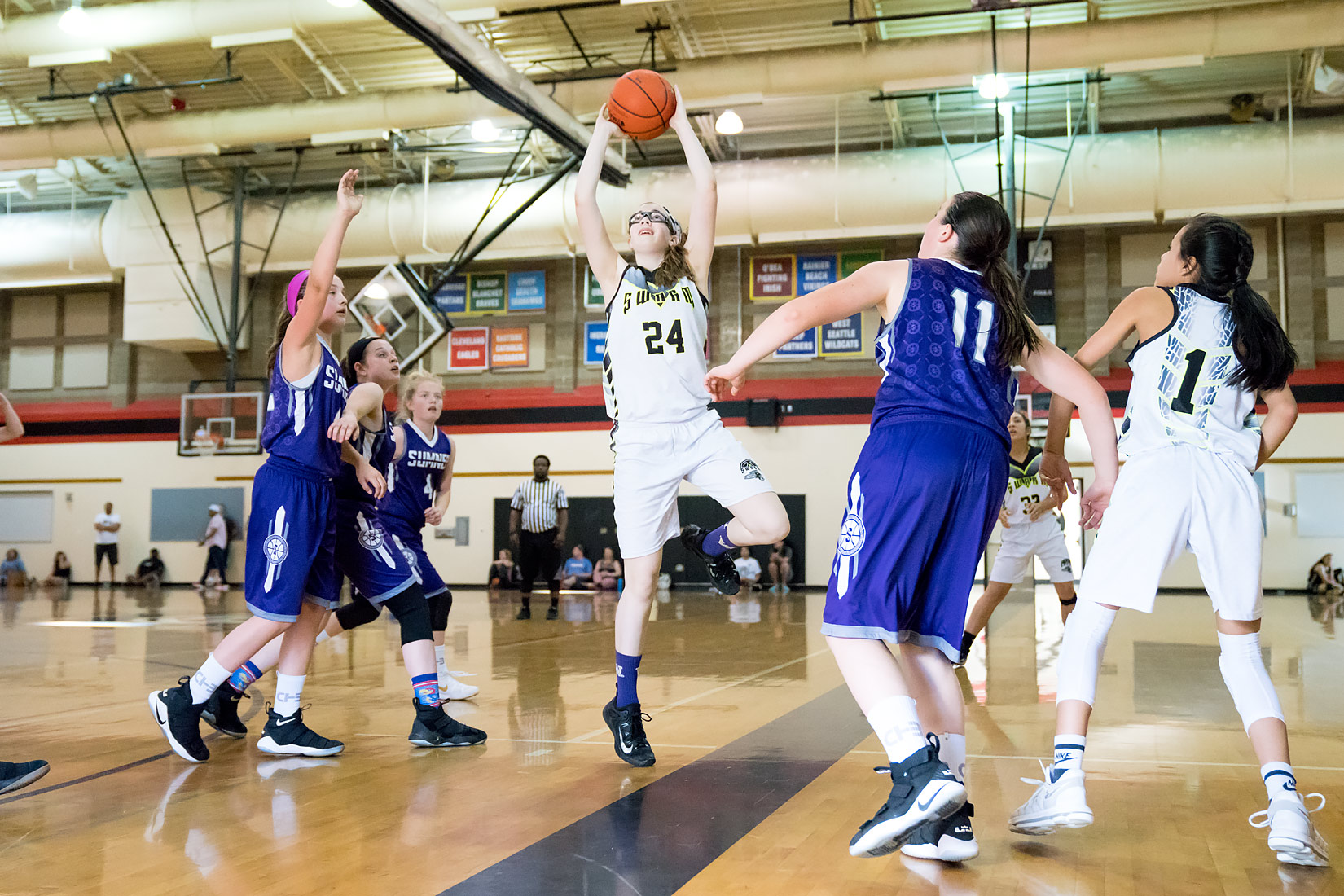 When the Sumner Spartans and Washington Swarm met for their final game of the tournament, the first half of the game was dominated by defense. After the first seven minutes of play, the score was 2-2, with all four points scored on free-throws. A minute later, Sumner’s #42 hit two more free-throws. As the period reached its halfway point (and following a time-out discussion of strategy), the Swarm’s #32 hit a three-pointer from the left side of the key for the first made-shot of the game and to give the Swarm a 5-4 lead.  Moments later, #3  sunk a short jumper to increase the lead, 7-4. But within a minute, the Spartans had come right back and hit two shots of their own, re-taking the lead (7-8).

All scoring ground to a halt for the next six minutes. With 3:50 left on the clock, the Swarm’s #1 hit a free-throw to tie the game at 8-8, and then both teams quickly hit another shot to maintain the tie at 10-points.  As the clock wound down on the half, the Spartan’s #4 drained a long jumper from just inside the three-point arc, and then just 14 seconds before halftime, the Swarm’s #3 hit a (dubious) three-pointer to take a 13-12 lead into the second half.

In the opening seconds of the second half, the Swarm’s #32 hit an 18-foot jump shot to increase their lead to 15-12, but Sumner immediately followed it up with a hard-fought layup, and the free-throw that followed it tied the game at 15. Again, the Swarm’s #1 was fouled as she drove to the glass, and made both shots (17-15). But after the opening two minutes, the game became a defensive stalemate.  Nearly four hardscrabble minutes followed without any scoring before the Swarm’s #1 was fouled on another layup attempt, and she made one of two shots (18-15).  On their next possession, though, Sumner’s #4 hit a weak-side three to tie the game once more.

And then the Swarm’s offensive woes began. In the final 16:30 of the game, the Swarm were only able to score 6 more points, and two of those were in the final 5 seconds. Whether they were shooting from twenty feet or from beneath the rim, the Swarm’s shots could simply not find the net, even when leaving the hands of steadfastly reliable shooters.

Meanwhile, the Spartans were fouled going to the rim and hit both free throws to take the lead, 18-20. After missing their previous 5 shots, the Swarm’s shooting drought was temporarily relieved when #0 hit a three-pointer to regain their last lead of the game, 21-20. But Sumner was on a roll, and quickly pulled back ahead with a long jump shot, and two free-throws on their next possession. With six minutes left in the game, the Swarm’s #1 hit a free throw to get back on the board, and the gap was still only four points (22-26). But as an invisible force-field seemed to keep the Swarm’s shots from the net, Sumner slowly but steadily added to their total. With two minutes remaining, their lead had grown to seven points, and with 30 seconds left, it was 32-22. With 3 seconds on the clock, #1 hit a mid-range jumper for the Swarm and the game ended at 32-24: Winner, Sumner.