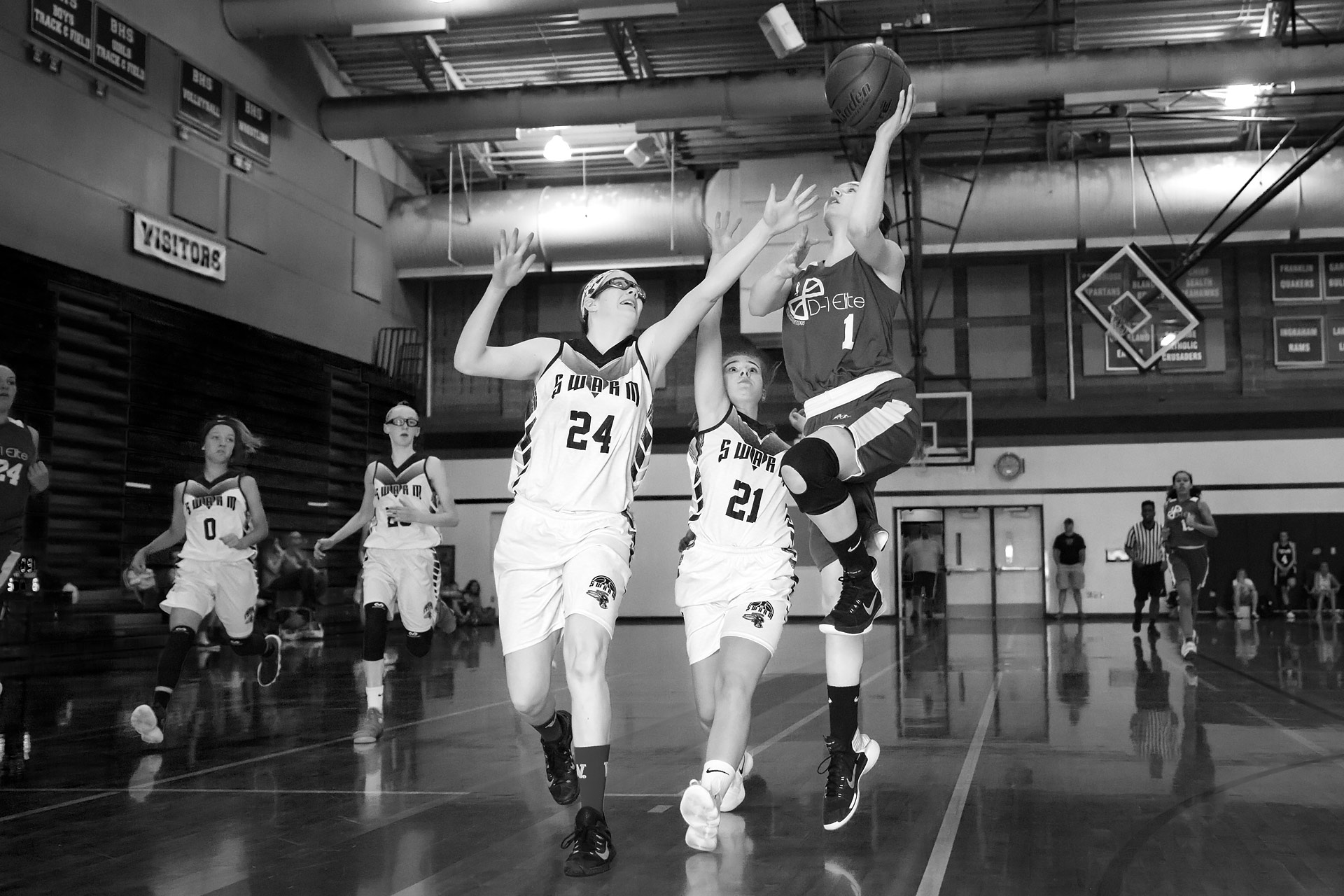 D-1 Elite met the Swarm again between the sketchy boundaries of the second court of Ballard High School’s gym. In their previous match,  D-1 had edged out the Swarm with a 2-point win, so it promised to be a good, close match. The Elite jumped out to a quick 4-0 lead on a pair of layups. The Swarm got on the board with a single free-throw and then started hitting shots from the floor, but the D-1 girls were able to maintain their three point lead for the first seven minutes of the period, until the Swarm’s #23 sunk a 20-footer to tie up the game at 8-8. After two and a half scoreless minutes, the Swarm’s #1 banked in a layup while being fouled, and hit the free-throw to take their own three-point lead. For three minutes, the scoreboard didn’t change, but then the Swarm’s #23 hit a weak-side 20-footer, increasing the lead to six (8-14).

But the lead didn’t last long. Within minutes, the Elite’s #11 hit a (dubious) 3-pointer, which the Swarm’s #3 followed with a long two. This was answered by D-1’s #24 with a 4-foot jumper, and the gap was narrowed to a single point after a foul and two made free-throws by the Elite’s #1. With just a 1:32 left in the half, the D-1 Elite regained the lead with a mid-range jump shot by #11, and they went into halftime with the score 17-16. The Swarm had missed all of their shots for the final 8:45 of the half. 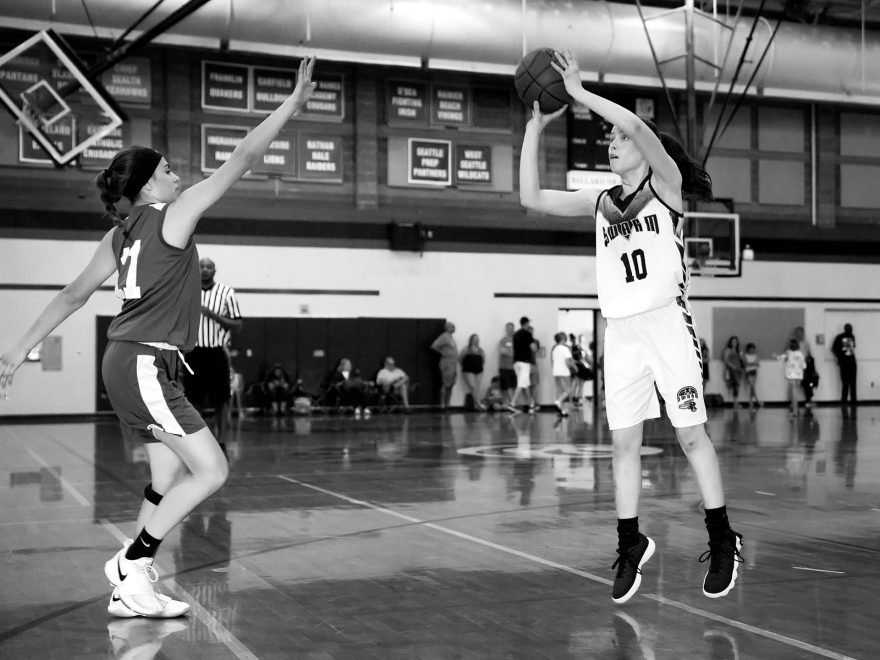 To open the second half, the Swarm’s #10 hit an 18-foot jumper regain the lead, and then they tacked on two more points for a bit of breathing room. But then both teams stepped up their defense, and neither team was able to score for a full five minutes. With a third of the period behind them, the Swarm’s #32 sunk a shot from three point range, but with her toe just over the line, making the lead five points, but D-1’s #10 almost immediately hit a free-throw to pull it back down to four. A minute later, the Swarm’s #23 answered with another deep three-pointer, giving the team their largest lead of the game, at 18-25.

As the half reached its midway point, the teams traded shots (20-27), but then the Elite began chipping away at the lead. For the next three and a half minutes, the Swarm’s shots missed their mark while the Elite gained ground. Finally, the Swarm’s #24 hit a free-throw to get them on the board again, but the Elite had closed in on them 24-28, which quickly become 26-28 on #15’s shot from deep inside the key. A free-throw(#1) made it 27-28. With just over five minutes remaining in the game, D-1’s #10 eased in a layup to retake the lead at 29-28.

With exactly three minutes left in the game, the Elite’s #10 made a layup for the lead, but with 47 seconds to go, the Swarm’s #1 dropped in a breakaway layup to match it (31-31). Strong defensive efforts by both teams lead to one free-throw each in the closing seconds, making the score 32-32 with 11 seconds to go. 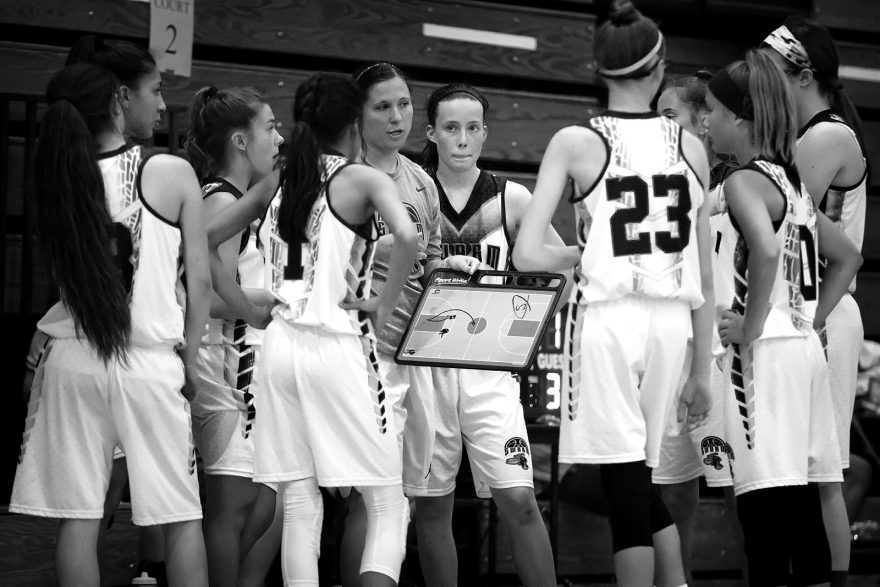 The Elite recovered the rebound after the Swarm’s second free-throw, but a struggle for possession ensued. This time, however, the D-1 coach’s calls for a time-out were ignored. Instead, a foul was called, which sent the Elite to the line one last time, where #1 made both of the free-throws. Though seven seconds remained on the clock, the Swarm were not able to get the ball back to their end of the court, and the game ended 34-32. Winner: D-1 Elite

[Note: The light was weird in this gym. The overhead lights were dim, but also flickered at a speed invisible to the eye, but not to the camera. While they flickered, the color changed from green, to yellow, to pink, and then went dim before the cycle started again, and each bulb cycled on its own timing. So, at any given time, part of the court had a pink cast, and part had a green cast. To combat the dim light, I sat in front of the open doors and used the daylight (much more blue than the interior light) and got a fill-flash effect from it… but correcting for that color makes the background extra yellow. I decided it wasn’t worth the time to try to color-correct them all, so we’ve ended up with haphazard colors this week :-)]