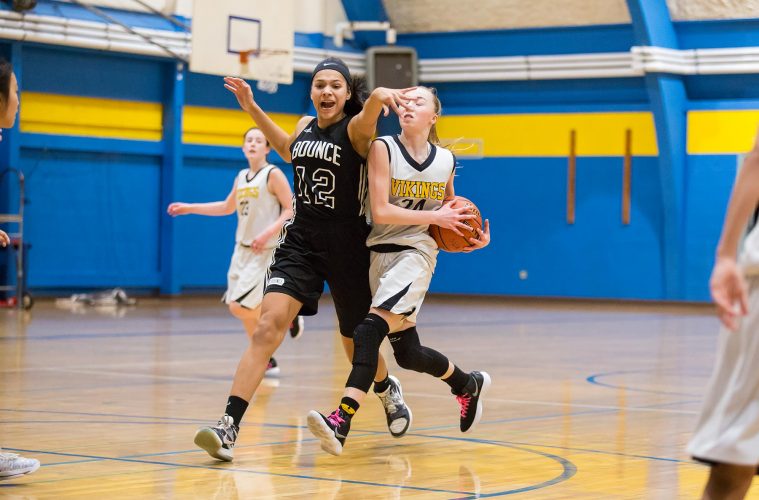 The Championship Game: BC Bounce vs Inglemoor Vikings

On Sunday afternoon, the 7th grade girls of the Inglemoor Vikings hit the hardwood to face an apparently older and taller Canadian team, the BC Bounce1 I don’t know the exact ages of these girls, but at least four of them play on their school’s (regional champion) 8th grade basketball team. Perhaps it’s just coincidence that they’re significantly larger and taller than the Vikings, but all evidence points to the contrary. Photos sourced from BC Bounce website, Twitter, and facebook, photographers unknown.. Inglemoor started the game fiercely with an outside shot and hard drive through the paint, pulling out to an early 5-2 lead. A deep 3-pointer by BC’s #9 tied up the game at five and the score remained tight throughout the half: after twenty-one minutes on the floor, the score was tied at 16-16, and at halftime the Bounce were up by only two.

The Canadians retained the narrow lead throughout much of the second half. With six minutes left in the game, the Vikings pulled ahead by a point, 27-26, but were not able to hold on. In its final minutes, the game became increasingly physical, and the Bounce made most of their free throws to build a substantial cushion. The final score of 30-41 does not reflect how closely matched these teams were, but it does, perhaps, reflect their experience in finishing out big games. BC Bounce finished the tournament in first place in the division, with the Vikings landing in second.